M, b. June 4, 1828, d. May 28, 1906
Samuel L. Sweeney Samuel was a prosperous farmer who was reputed to have owned 1000 acres, partly inherited from his father, in the Little River District of Floyd Co., Virginia. Samuel and Margaret (Thomas) Sweeney lived on a large farm past the Floyd County poorhouse, on route 679. Samuel was a constable in Floyd Co. for over 30 years. He donated an acre of land for Cabbal School. Margaret got sick when her son Peter was small, and was bedfast for several years. Samuel used hired help to run the home. Margaret died when Peter was twelve. Samuel then married Mary Young, and had three more children. Samuel's mother, Nancy (Moore) Sweeney, lived to be ninety and stayed with Samuel in her older days. The small children worried Nancy, so Samuel built her a house near his own. Her grandson, Peter Edmund Sweeney, stayed with her some to keep firewood and do chores for her. He was born on June 4, 1828 at Franklin Co., Virginia. He married Margaret Thomas on February 15, 1855 at Floyd Co., Virginia. Samuel L. Sweeney died on May 28, 1906 at Floyd Co., Virginia, at age 77.

M, b. June 18, 1775, d. September 24, 1860
Mathias Furrow was born on June 18, 1775 at Loudoun Co., Virginia. He married Barbara Weaver on April 7, 1812 at Montgomery Co., Virginia.1,5 Mathias Furrow left a will on August 11, 1860 at Floyd Co., Virginia; In the name of God Amen. I Mathais Furrow of the County of Floyd & the state of Virginia, being in advanced years and feble body, but of sound natural mind, do make and ordain this my last will and testament as follows to wit: I will that my son Adam Furrow shall have all of my land on which he now lives. By heirs 1st. Adam Furrow paying Flemming Poff & Barbara his wife and his heirs three hundred dollars in cash at my decease. I futher will and desire that my executor pay out of my monies arising from the balance of my estate Twenty dollars to each of my two grandchildren (Nathainel and Haden Conner). Then my will and desire is that Flemming Poff and Barbara his wife and their heirs shall have all the balance of my estate in every respect in addition to the three hundred dollars to be paid to him there by. Adam Furrow as afore mentioned is witness I have ____ to set my hand and sign in the presence of the following witness this 11th day of August 1860. I appoint S R Aldridge my Executor. Mathais X Furrow Mark Witness: S R Aldridge Dr. Lo Watton Samuel S Conner Virginia At a court held for the county of Floyd at the courthouse on the 26th day of Janurary 1861. The court after hearing testimony and of opinion that the paper bearing the date of 11th day of August 1860 and witnessed by S R Aldridge, D L Watton, and Samuel Conner who testified there to is the last true wish and testament of the same Mathais Furrow, Decd'. It is therefore ordered that the same, be recorded. Teste. Wm. B Shelor. Clk.6 He died on September 24, 1860 at Floyd Co., Virginia, at age 85; Died of fever. 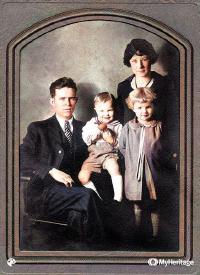 Gladys Marguerite Conner was buried at Oakwood Memorial Park, 22601 Lassen Street, Chatsworth, Los Angeles Co., California.8 She was born on January 7, 1925 at Roanoke, Virginia.6,4 She married Dr. Allan Blair Schaffer, son of Lt. Col. Dr. Philip Frebush Schaffer and Irma Carlysle Williams, on June 20, 1954 at Roanoke, Virginia.6,2,3 As of June 20, 1954,her married name was Schaffer.3 Gladys Marguerite Conner died on July 20, 2014 at Van Nuys, Los Angeles Co., California, at age 89.8 She Gladys Marguerite Conner Schaffer passed away early Sunday morning, July 20, in Van Nuys, Calif. She was born Jan 7, 1925, in Roanoke to the late Robert Russell and Juanita Elmore Conner. Although she spent the last 59 years in Southern California, she was a Virginian in her heart. Mom loved to share childhood stories about her colorful and numerous relatives in Roanoke and Floyd County. She is survived by her husband of 60 years, Dr. Allan Blair Schaffer; sons Scott and his wife Debra, Bret and his wife Charlotte, Rick and his wife Margaret; daughter Lisa and her husband Taft Blokzyl; grandchildren Ciana, Conner, Jade, Ray, Violet, Holly, and Lindsey; sister Jane Hevener and her husband Paul. She was predeceased by her brother Robert "Bobby" Conner. Services will be private and burial will be in Oakwood Memorial Park, Chatsworth, Calif. on July 23, 2014.9

Reva Alma Williams Reva died at age 34 after spending 10 months at the Hopemont Sanitarium while suffering from tuberculosis. Hopemont served as the state tuberculosis sanitarium from 1912 until 1965. This farm in Preston County was chosen for the location because of the high altitude and cold winters and because patients could come there by train. At that time it was believed that high altitudes and cold temperatures were necessary for a cure. Hopemont was located just south of the town of Terra Alta, West Virginia. The farm raised food to help with the expenses of feeding the patients as well as the workers. Non-violent criminals were sent there to work the farm. They had a herd of dairy cattle and were self contained. The sanitarium had its own laundry and hospital with a fully equipped operating room. After WWII, the hospital was converted to a place for the sick people that were in Moundsville Prison. The tuberculosis patients were moved to the Terra Alta Tuberculosis Sanitarium.4 She was buried at Sunset Memorial Park, South Charleston, Kanawha Co., West Virginia.7,6,8 She was born on September 5, 1897 at Clifton Forge, Alleghany Co., Virginia.4,8 As of January 18, 1917,her married name was Scruggs.1 She married Jessie Joseph Scruggs on January 18, 1917 at Clifton Forge, Alleghany Co., Virginia.1 Reva Alma Williams and Jessie Joseph Scruggs were divorced before January 6, 1920.9 As of circa 1926,her married name was Caproni.10 Reva Alma Williams married Albert Williams Caproni Sr. circa 1926.4,6,5 Reva Alma Williams died on December 16, 1931 at Hopemont Sanitarium, Terra Alta, Preston Co., West Virginia, at age 34.4,5,6,8 She Mrs. Albert Caproni, 34, the wife of the president of the Biagi Fruit and Produce company here, died late yesterday afternoon at Terra Alta, following a long illness. Mrs. Caproni was the daughter of Mrs. T. A. Williams of Clifton Forge. Va. Mrs. Williams was a guest at the home of her daughter and son-inlaw, Dr. and Mrs. P. F. Schaffer of Valley road, at the time of Mrs. Caproni's death. Besides her mother and husband, Mrs. Caproni is survived by one son, Albert Caproni, Jr; two sisters, Mrs. Schaffer and Mrs. Harry C. Deisher of Charleston, and one brother, Lawrence Williams of Clifton Forge. Mr. Caproni and Dr. Schafter left yesterday for Terra Alta to arrange for funeral services. Whether services will be held here or at Clifton Forge had not been decided last night. on December 17, 1931.6 She Funeral services for Mrs. Albert Caproni, 34, who died Wednesday at Terra Alta, will be held at 10:30 o'clock Saturday morning at her residence in Bridge avenue, South Side. The Rev. B. P. Taylor will have charge of the services. Burial will be in the Sunset Memorial park. Mrs. Caproni was the wife of the president of the Biagi fruit company and the daughter of Mrs. T. A. Williams of Clifton Forge, Va. She is survived also by two sisters, Mrs. Harry C. Deisher and Mrs. P. F. Schaffer, both of Charleston, and a brother, Lawrence Williams, of Clifton Forge, and a son, Albert, jr. She is preceded in death by her father, who died two years ago, and two brothers, Roland and Rayburn Williams, who were killed in action in France during the World war. on December 18, 1931.5

M, b. January 9, 1959, d. April 4, 2012
Frank Lemuel Bayne married Debbie Unknown.4 Frank Lemuel Bayne was born on January 9, 1959 at Roanoke Co., Virginia.1,6 He died on April 4, 2012 at Roanoke, Virginia, at age 53.6,2,3 He Frank Lemuel Bayne, 53, of Roanoke, passed away Wednesday April 4, 2012. Surviving to cherish Frank's memory are his daughter, Crystal Fink and husband, Troy; stepdaughter, Brittany Chittum; brothers, Randy and Harry Bayne; grandchildren, Katie, Logyn, Aaryanna, Kaelee, unborn baby Z; and a number of other family members and lifetime love, Shelia Chittum. There will be an informal memorial service Saturday, May 5, 2012, to celebrate Frank's life and scatter his cremated remains. For information concerning time and place of service, please contact the family. Frank was a loving father and grandfather and will be sadly miss by all who knew him. on April 10, 2012.2